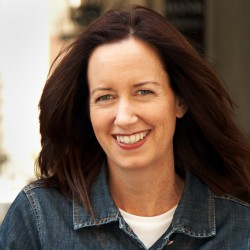 Ann Randolph is an award-winning actress, solo-performer, workshop leader and writing coach.  In our conversation she talks about her career and how she found the courage to embrace her own eccentric, irreverent, and totally authentic voice  – on stage and in life.

Ann shares some of the philosophy that she offers in her wildly popular writing workshops:

MY 3 MINUTE REFLECTIONS ON THE INTERVIEW

LISTEN TO THE Full EPISODE HERE

You can  listen to the delightfully explicit version here with references to Brandy, her famous character, the lovable crackhouse whore.

Loveland is running currently (October 2015) at the Marsh Theatre in San Francisco.

This past March, the Arena Stage in Washington DC produced LOVELAND  along with a post show interactive writing workshop on grief and loss.

Her previous solo  show, Squeeze Box was produced by Mel Brooks and the late Anne Bancroft and enjoyed a successful Off-Broadway run before touring the United States.

A favorite spoken word artist, Ann has won the LA Moth and Her personal essays and interviews have been featured on NPR, PBS and the BBC.

As  a sketch artist, she has performed her original material in  countless comedy shows including the famous LA Improv group the Groundlings.

She is also a nationally recognized educator and keynote speaker Her widely popular “Write Your Life” workshops are offered in cities across the US with annual stops at Kripalu, the Omega Institute and Esalen.

She is now offering a TED talk styled performance piece that includes work with the audience called “Inappropriate in all the Right Ways”.

Learn more about Ann and her workshops at www.annrandolph.com