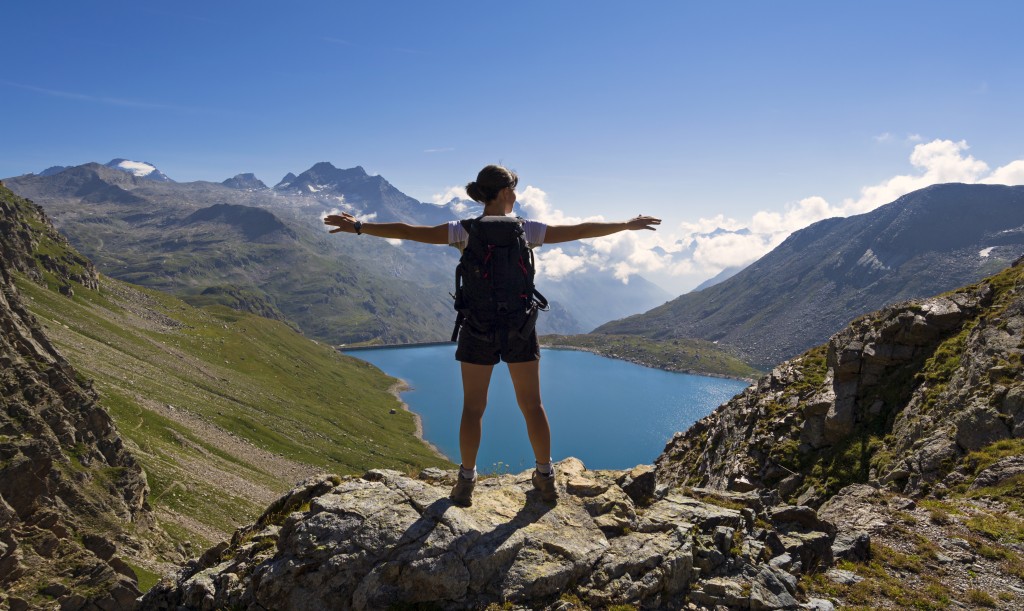 Can body language, and specifically your posture influence how you think, how you feel, and how you are perceived in the world?

I think so, and that’s why I wanted to hear Dr. Amy Cuddy’s TED talk “Your Body Language Shapes Who You Are.” It’s one of most viewed TED talks ever.

I could see why: Cuddy’s poised, personal, and packs a powerful take-away: the idea that you can become more self assured and be perceived as powerful by simply shifting your stance for a couple of minutes.

A N.Y. Times article reported that after her talk before 1500 employees at Zappos, the lobby was packed with people trying to practice her power pose (hands on hip, legs wide.)

Dr. Cuddy teaches at the Harvard Business School, where she regularly observes the body language of alpha MBA’s – you know, the ones who seem bred for success. But she doesn’t stop at the gates to the Ivy halls. She speaks at youth shelters where they don’t understand how a caved-in posture might signify a lack of motivation. She shows youth and other disadvantaged populations how to transform their success with job interviews by using posture and poses that demonstrate confidence and power.

In her research, Cuddy demonstrated how participants in her study showed an increase in testosterone (good for self-assurance) and a decrease in cortisol (meaning less stress) after two minutes in a power pose. And they felt more confident.

To the ones who worry that the poses might feel fake, she counsels, “fake it until you make it.” The postures work anyway.

I get it. For years I’ve been helping my clients become aware of their bodies and experiment with posture when they make presentations. They’ve discovered that by using their body language they can engage their audiences more and make their stories come alive.

Still there was something about Curry’s talk that was making me squirm (not a power pose).

Maybe it was the poses themselves. Here as some power poses from her slides: 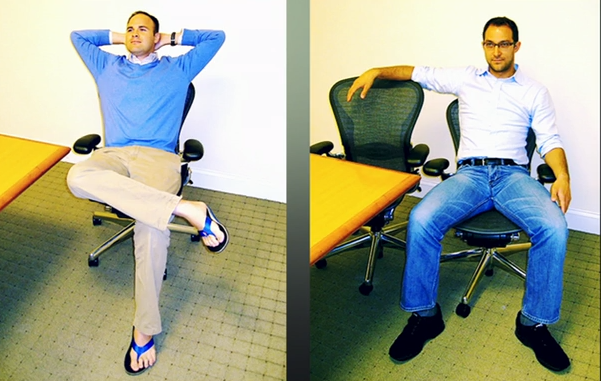 Are these alpha male or what? Even seeing a woman in the pose still looks like a predominantly male pose. 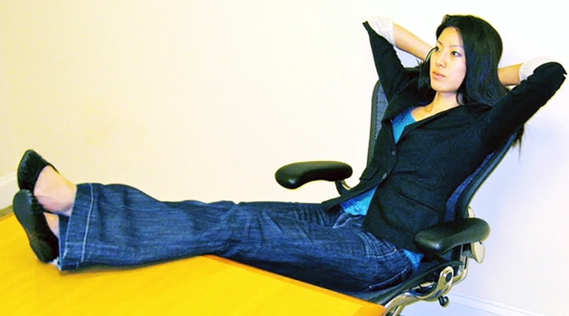 Wait a sec! Does this mean that power and confidence correspond to the body language of alpha males?

And is the kind of leadership demonstrated by alpha-dominant male Harvard MBA’s what the world really needs right now? 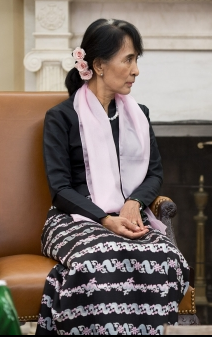 No doubt, you do need the poses at the Harvard B-School. I saw plenty of alpha dominant behavior when I attended the Yale B-school, even though we didn’t face Harvard’s fierce competition for grades. Although I never achieved alpha status at Yale, I did figure out how to stick my hand straight up in the air when I want to be called upon in an audience (a trait, Curry says, some women lack). And I know how to use my breath and my posture to assertively jump into a discussion when I need to.

But right now, I’m looking for a different set of power poses.

Look at this official White House photo of Aung San Suu Kyi, from Burma, when she met with President Obama.  She’s holding her legs together! She’s not asserting dominance! And this Nobel Peace Prize winner is one of the most powerful women (people) in the world today!

Last spring, I learned about the world of postures when I studied acting in expressive masks in a class run by master director/actor/teacher Arne Zaslove. Arne brought us a variety of masks: geisha, tramps, millionaires, servants, thieves, doctors and more. He told us to really feel the essence of our masks and the postures they suggested before we put on our masks. When we adopted these postures, the nature of our characters came alive. We experienced the power within the characters, whether they were high status or low status – and expanded our range of expressiveness.

Dr. Cuddy’s work demonstrates to the world the importance of body language. But we need poses that take us beyond the limits of alpha-masculine expression.

After all, we’re not all auditioning for the School of Alpha.

Why don’t we find some other postures that demonstrate the power of compassion, empathy or mindfulness, qualities well known to many women and introverts (among others).

We need a range of postures to go with new leadership models. Imagine this one: You’re in a Harvard B-school classroom and the professor gives you this assignment:

“I want you all to sit in a circle with your feet planted firmly on the ground. We’re going to take a couple of minutes to breathe together in silence. Then, after the quiet, if you have something to say that you feel will contribute to us all, please speak. Otherwise, we’ll sit in silence and try to hear any ideas that want to emerge amongst us.”

Wouldn’t that be amazing? No dominance in the circle. No battle of alpha-egos. I bet in that environment students would discover, in their bodies, a new source of power.

Thank you, Dr. Cuddy. You’ve given us good stuff. I don’t want to throw away the power poses. I just want more options.