7 Questions to Ask When Challenged by Evidence 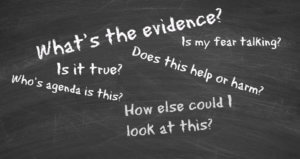 Last week, I heard a chilling term for a world where facts get distorted, taken out of context, and manipulated at will: “The Post-factual World.”

Have we moved into a world that doesn’t care about evidence? Is there a way to deal with our own pain and fear, so that we can face the facts without jumping to conclusions that can hurt ourselves or others?

I began writing this blog after hearing a story on National Public Radio about the systemic persecution of the LGBT community in Russia. The reporters described how politicians were twisting facts into bigoted propaganda with devastating results.

The Russian scene is grim. But don’t we have reality distortion here in the States as well?

How can we make friends with facts and pursue the truth, even when we we’re caught up in difficult emotions?

The situation in Russian is painful and alarming. Politicians are distorting facts, feeding on fear, and using the state controlled media to send out bigoted information designed to terrorize the public about the LGBT community. Broadcasting this information has led to loss of jobs, humiliation, and even deaths. The reporter from Reveal News covering the story described how politicians had created a “parallel reality” of false facts about the LGBT community and used fear to justify invading the Ukraine. It’s a disturbing and powerful piece of journalism.

Listening to the story, I couldn’t help thinking about how there are “parallel realities” going on in the United States, where the public’s pain and fear is being manipulated through systematic distortions of the truth, leading to dangerous conclusions and alarming, if sometimes ludicrous, platforms for change.

Before assuming that distorting evidence is only happening “out there,” I needed to look at how my own fears shaped conclusions I draw about my work and finances.

When I had to face the numbers

This week, I finished my taxes for 2015. If you want a great way to look at what you value and how you run your life, take a look at your checkbook and credit cards. Believe me, it can be confronting.

Reviewing my accounting, I didn’t like what I saw. 2015 was a year in which I moved my business in a new direction, invested in development, and, frankly, didn’t make the money I’d have liked. And because my concern about money was painful, I had barely dealt with my accounting over the course of the year, except for the minimal, required, bill paying and invoicing.

Hidden within the numbers, and my unwillingness to face them, I recognized signs of pain.  Beneath that pain was a chorus of verdicts and conclusions:

Ouch. Facing the facts was painful! After a night’s sleep, I decided to pay another visit to the “Factual World,” (which I still believe in!) and re-visited the evidence. I couldn’t fault the data: unlike some public media information, my data were reliable. I needed to re-examine my conclusions. Using the questions below, I came to some different ones:

These conclusions were also based on facts – but I could only see them when I was willing to face the pain – and keep examining the evidence.

Here are 7 questions that can help you face the facts (even if they are confronting):

When it comes to the larger global politic, Russia and closer to home, I’d add: Who’s manipulating the data and to what end? What’s happening in Russia is sobering and affects us all more than you might know. As does what’s happening with our own election cycle.

Here, in my life, I need to be aware of the intention with which I review the data.

Because when I examine evidence looking for how to create a positive future for myself and others, I don’t need to ignore, sugarcoat or distort the evidence in order to find the courage to keep creating.