Use Your Story to Find Your Tribe 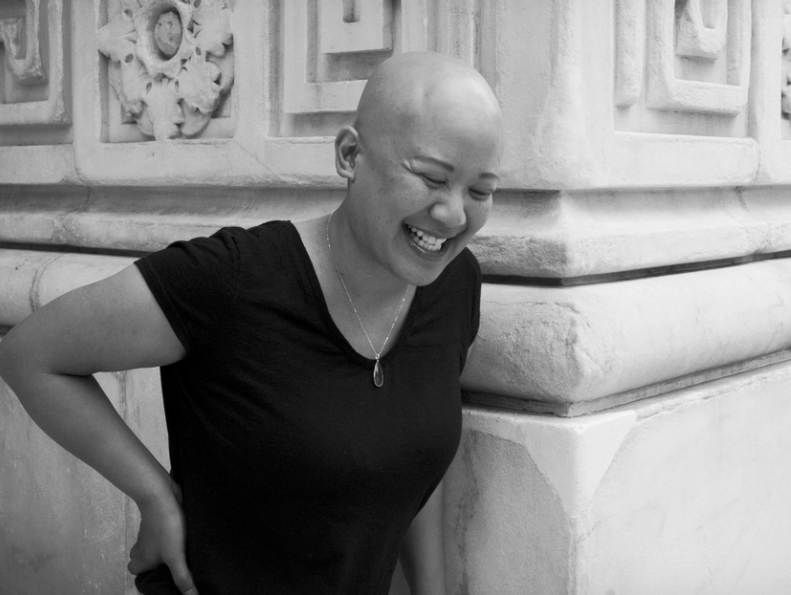 If you met me in-person today and didn’t know what I looked like prior to meeting, the first thing you would notice is that I’m a bald woman.

Upon first glance, you can’t tell if it is because I’m sick or because I’ve chosen it. (I suppose you could think I am a monk if it weren’t for my love for a little bit of daily flare – belt buckles, jewels, and the sorts.) It is not lost on me that this can be a bit distracting and that questions surface. For years when I would meet someone, within the first five minutes, I would work in “I know, I’m bald…” and I would complete the sentence with a joke, putting any awkwardness to rest. I had a whole routine down that allowed me to acknowledge without getting into the details, bring someone in but keep them at arm’s length away from the real story.

In a moment of raw honesty this time last year, I blogged about my – for real – professional story of being a bald woman. The domino-effect it had on my life was quite amazing. It in fact, led me to the wonderful Sally Fox by way of a friend-of-a-friend-of-a-friend who took a chance and commented on the blog post and thus brought along her tribe to the post and into my life.

My life changed with those 700+ words because I saw the effect of sharing a sliver of my heart story with the masses.

People who I didn’t know wrote me. Friends I had not heard from in a very long time, called me. I signed two clients as a result of that post. Who knew all these people actually read what I wrote, let alone would connect with what I perceived to be a lame story?

The world is hungry for honest connection

It made me realize how hungry the world is for connection, how hungry I had been for connection, and to be frank, it scared me. First, because telling the truth made my stomach turn and second, the blog post outed me for having it in me to share that level of honesty. Up until that point, I had been lazy with my words, with sharing my story. If I showed up this way once, would the world ALWAYS expect such authenticity?

I’ve been reflecting on this for about a year now and playing around with what it means in my day-to-day existence. And the answer I’ve come to is a resounding YES. Yes, I do need to show up honest and pure and raw in everything that I do no matter what it does to my stomach. And not for everyone else, but for me. That one leap of faith made me continue to share portions of my story – way beyond the boring bald story – with everyone around me from my nieces to my clients.

The stories have varied, from uplifting to sad. They have been about the times I’ve failed in business, how I became an accidental technologist, why I know so much Sanskrit, why I cry every time I vote, where I think entrepreneurs are failing miserably, and more. This sharing of stories has built me a tribe of clientele and friends who make me so excited to get up in the morning. And the only requirement is that I lead with the truth – ugly or not – because it creates the space for those around me to show up in the same way. And there is an ease in that.

Sharing stories opens the door for others

My favorite part of of this process is that in sharing my stories, others feel inclined to do the same; the truth breaks down barriers and I get to hear what I cannot see in someone. It is downright awesome.

Like I said, I had been so lazy up until that post. Self-censoring was a natural way of life and holding my stories close to my heart was easier. Now I realize that it was actually the harder path. Had I got on board with sharing fast and furious, I would have learned that I would attract the right people into my life from the get-go because we were connecting beyond professional credentials and surface commonalities. Had I functioned from this place earlier, maybe I would have skipped over those questionable clients who made me want to pull the last of my eye lashes out or I would have bypassed the job I should have never accepted to begin with. But c’est la vie is what I say.

Lauren Lizardo can be found over at www.laurenlizardo.com, where she doles out real talk ‘bout money + technology + heart.