A champion for justice who deserves to be known

Last week was tough, for me, for many, filled with horrific images and the sadness that my country, the United States, is not living up to its ideals. While being confronted by the harsh realities of systemic discrimination, I sought stories that offered me pictures of resilience, perseverance, and hope.

I found them in the biography of an African-American woman I had never heard of, but should have, Pauli Murray.

She is one of the heroes of the twentieth-century, an activist, feminist, lawyer, poet, and priest who helped shape the course of our history.

Today, a residential college at Yale, where she earned a doctorate in law (JSD), is named for her. The Episcopal church canonized her as a saint they recognized “for her advocacy of the universal cause of freedom and as the first African American female priest ordained by the Episcopal Church.”

Her life is too big to summarize in a post, but, in just eleven minutes, the above video does a good job of highlighting her life.

Throughout her career, Murray worked for civil and human rights.

In 1940, 15 years before Rosa Park’s refusal to give up her seat on a Montgomery bus, Murray refused to go to the back of the bus while traveling through Richmond, Virginia. She was arrested and jailed. She organized sit-ins in Washington, DC in the 1940s. She worked with the Workers’ Defense League on the defense of Odell Waller, an African American sharecropper found guilty by an all-white jury and sentenced to death for the murder of his landlord. That experience propelled her to go to law school.

As a lawyer, she helped shape the Civil Rights movement.

Thurgood Marshall called her book States’ Laws on Race and Color, ‘the ‘bible’ of the Civil Rights Movement.

In her memoir she wrote:

“Seeing the relationship between my personal cause and the universal cause of freedom released me from a sense of isolation…I would be no less afraid to challenge the system of racial segregation, but the heightened significance of my cause would impel me to act in spite of my fears.”

She faced systemic discrimination at every turn

As an African American woman born in the first part of the century, she faced on-going discrimination. The University of North Carolina rejected her graduate school application because of her race. She went to Howard Law School (one of two women) and graduated top of her class. Even though Harvard University always reserved a place for the Howard Law valedictorian, it turned her down because she was a woman.

Cornell University denied her a faculty position because her references, Eleanor Roosevelt, Thurgood Marshall, and Phillip Randolph, were considered too radical in the McCarthy era.

Murray did ground-breaking legal work on sex discrimination that Ruth Bader Ginsburg used while preparing the briefing for Reed v. Reed, the historic Supreme Court case. Although Murray didn’t contribute directly to the case, Ginsburg valued her work so highly that she named Murray as a co-author of the brief.

She was complex and multi-faceted

She was small, feisty, gracious, and not afraid to speak truth to power.

She was a co-founder of NOW. (National Association of Women.) She published books of poetry as well as a book about her family and the 600-page memoir I’m reading now: Song in a Weary Throat. 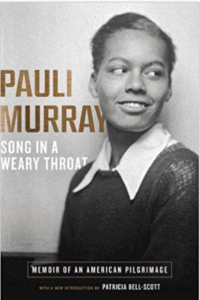 She struggled with her gender identity and considered herself “gender nonconforming.” Perhaps that was part of why she faded from history, at least for a while.

She never stopped following her values and giving

At age 62, she entered seminary studies, and in 1977 she became the first African American woman ordained in the Episcopal church. When she was forced by the church to retire at 72, she became a priest for the hospitalized and homebound people in Alexandria, VA.

Despite all the injustice she witnessed or experienced, she never gave up on herself or the country.

“As an American, I inherit the magnificent tradition of an endless march toward freedom and toward the dignity of all mankind.”

She worked with Presidents and counted the Roosevelts as her friends, but she shunned the limelight.

She failed, again and again, being ahead of her time, but eventually shaping the times.

“In not a single one of these little campaigns was I victorious. In other words, in each case, I personally failed, but I have lived to see the thesis upon which I was operating vindicated. And what I very often say is that I’ve lived to see my lost causes found.”

In a world overfilled with bluster, in which religion gets reduced to a photo op and oppression is still systemic, voices like Murray’s give me hope.