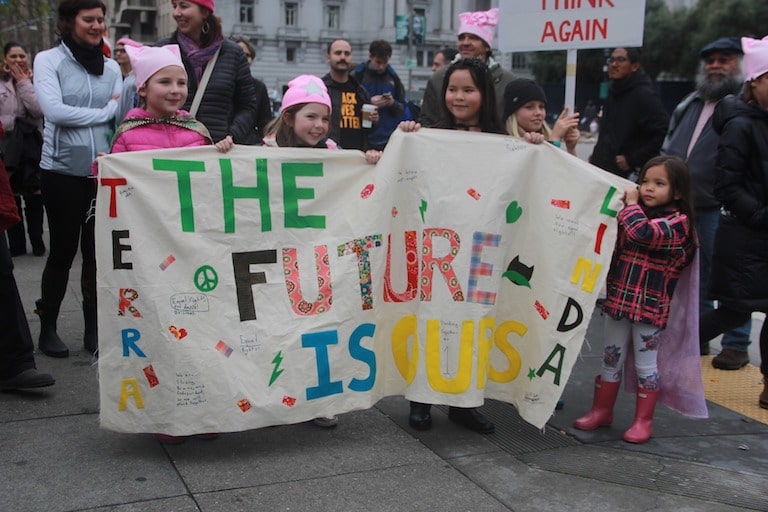 What if women, in this county and around the world, were to link arms across divides, including color, class, faith, sexual preference, and nationality, to demand a more loving and just world. A “no” to greed, bigotry, and war. A “yes” to compassion, caring, and peace.

Sound like too big a fantasy? But in dark times, don’t we need a few visions, even if they might initially strike us as air castles?

Consider the story of Liberian activist Leymah Gbowee. who organized women of different faiths and walks of life to protest together for peace in their war-torn country. Dressed in white and sitting by a fish market in the hot sun, the women braved the local warlords to demand peace negotiations. When those negotiations began but stalled, Leymah took a delegation of women to the site of the negotiations in nearby Ghana. The women blocked the building’s doors and windows and refused to leave until the men inside negotiating reached an agreement. When security forces tried to arrest the women, Leymah threatened to disrobe.

She knew that according to traditional beliefs, disrobing would bring a curse upon the men. The security forces backed down. The event was later seen as a turning point in the peace process.

Or Dr. Alice Min Soo Chun, an immigrant to the U.S. from South Korea, whose activism was triggered by her son’s asthma. She remembers hearing the saying, “A worried mom does better research than the FBI.” Soon, she was studying about asthma, air pollution, and learning about the number of people around the globe living without access to electricity. She imagined a solar solution. As a professor of architecture and material technology at the Parsons School for Design, she challenged herself and her students to come up with a solution an individual could use in a disaster. The result was a self-inflating solar light called the “SolarPuff” that could allow communities without access to electric power to function. When Hurricane Maria devastated Puerto Rico, she sent three thousand SolarPuffs to the Mayor of San Juan. She later visited the island and distributed SolarPuffs to schools so that children could do their homework at night and households could function. She told the children, “Even more powerful than the sun is the light in your mind, your imagination.”

Or Daisy Bates, who defied racism and threats to her life to co-found the Arkansas State Press, and later made sure that the schoolchildren called the “Little Rock Nine” were able to enter school safely as they desegregated the Arkansas school system. Last year, the Governor of Arkansas, Asa Hutchinson, signed a bill ordering that a statue of Daisy replace that of a white supremacist as one of the two Arkansas statues in the US Capitol.

Why don’t we all demand that statues of African American women replace the Confederate “heroes” in the U.S. Capitol buildings? 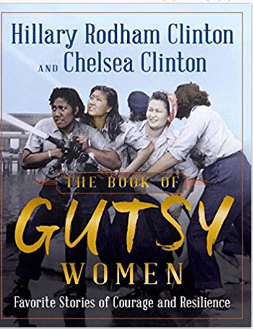 I found these and many amazing stories of resilience in The Book of Gutsy Women by Hilary Rodham Clinton and Chelsea Clinton.

I admit that I’d let my library copy of the book sit on my bedstand for two months, untouched. (COVID has extended my library loan!)  I was dubious about a book by celebrities, and I thought that it might be the kind of simplified, sanitized history one foists on middle schoolers.

Many of the women had suffered abuse, threats, even torture, yet transformed their pain into a commitment to better the world for others.

Of course, for every woman featured in the book, many of whom Hillary knew personally, there are thousands more (millions?) who deserve to be known. (Like the civil rights activist Pauli Murray whom I featured two weeks ago.)

So a vision of women locking arms together for change might not be that crazy.

Gutsy is contagious. When you read what these women have done, you gain faith in the future.

Now for a moment of joy:

I loved the following moment when an African-American mother finds out her daughter had been accepted into law school.