A question to guide your birthday 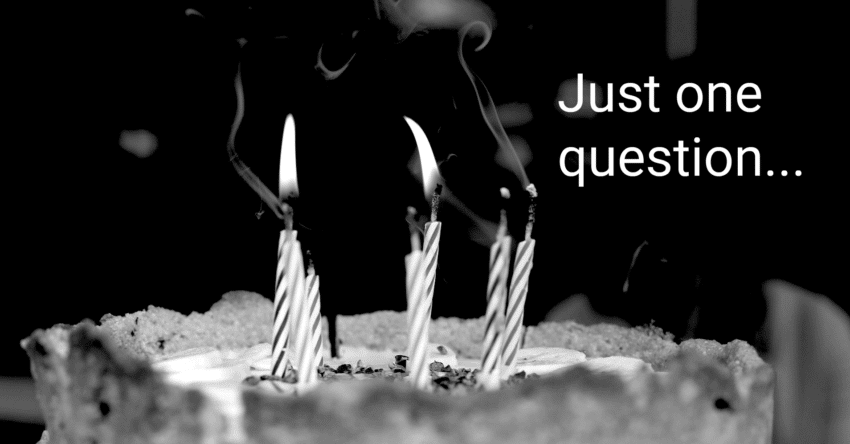 I’m writing this on my birthday, pausing to reflect on what it is to grow older.

I’m not yet ready to share my age, which is odd because I believe in claiming your age. At Ignite Seattle this past May, I closed my talk by inviting audience members, in one super-charged burst of enthusiasm, to shout out their ages.

Yet today, I’m not above feeling the stigma of aging in a culture that doesn’t know what to do with its elders.

That stigma is like the haze floating in our Northwest skies. It’s everywhere, intensifying the red fire of the setting sun, but you can’t see the source: the fires raging in California and Oregon. The stigma of aging penetrates our social atmosphere, showing itself on birthday cards of big-bellied older people on the ski slope joking, “It’s all downhill now.”

“It’s all downhill now…” Is that the story of elderhood? Where are the enlivening images of aging? The role models of elderhood?

Our story about aging is so out of sync with the world, neither heroic, redemptive, or interesting. Can you imagine going to a movie where the message was: “You grow older, you start to lose who you’ve been, people ignore you or too overtly care for you, and then you die?.”  Even popcorn sales wouldn’t save it at our local theatre.

Young people are concerned about aging, too.

For the sake of those who are younger, we need a better story about growing old.

At Ignite Seattle after delivering my talk about the promise of aging, I was approached by a thirty-year-old woman who said:

“I really loved your talk. I wish my friends could have heard it, especially that part about claiming your age. You wouldn’t believe what’s happening. My friends are giving themselves memorial-parties for their thirtieth birthdays. Everyone dresses in black to mourn that the best is over. I know one girl who is totally freaked out about turning twenty-one.”

She needs inspiration about the power of aging–not some cool photo of a dude climbing Kilimanjaro at eighty-five. I huff and puff climbing up the road in front of my house! We need stories that recognize the physical, even mental, limitations that can come with age, yet leave us with a sense of dignity, new respect for aging, and the hope that we’ll have access to a different, wiser, kind of power.

Do we even have elders?

In Stephen Jenkinson’s provocative new book, “Come of Age: The Case for Elderhood in Troubled TImes,” he argues that we have no place for elderhood in our culture. Jenkinson, featured in the movie Griefwalker, rattled the world of end-of-life care with his thoughts about death, learned in his years working in what he calls the “death trade.”

“Something in the fabric of life in North America inveighs severely against limit and ambivalence and not firing on all cylinders all the time, and this something is being driven to panic by the daily news and in the panic, you’ll find the refusal to age. This something robs age of elderhood. No one would seem to benefit from the theft and it isn’t likely that anyone would vote for it, but there is a general willingness to forgo aging, and to live without the elderhood that could have come with it. … Agedness is at best a prolonged, unextinguishable middle age…”

An elder, for him, is someone who knows the reality of death, failure, and limit. But the issues aren’t just about aging. Our failure to accept the idea of limits affects more than our relationship with the elderly. It’s at the source of an environmental crisis that stems, in part, from our failure to accept that there are limits to growth, limits to what our planet can tolerate, and limits to sustainability,

If the youth were to speak

This spring, the students from Marjory Stoneman Douglas High School in Parkland, Florida gave us straight talk about gun control. Their courage was the only silver lining after another godforsaken tragedy.

I imagined what they might say about the lack of elderhood in our culture. I doubt they would mince their words:

“You adults need to give us a better image of elder wisdom than we have today. You can’t just leave huge messes for us and then lock yourself away into comfortable communities with people just like you or retire to leisure villages and distance yourself from the problems of the world.

We understand that you may not have your old energy and may need to adjust what you can do. But here’s the deal: you have to stop running from the pain of knowing that the environmental, economic and social problems created on your watch aren’t like to be fixed while you’re still here. That’s going to hurt and you’ll just have to deal with it.

So don’t turn your backs on us. We need your wisdom. Grow up and become elders.”

An example of eldering

Where do we look for elders? I don’t know.

Not necessarily in elder circles, or crone gatherings, although a few might be there. I can’t tell you who an elder is, but I can recognize someone who seems worthy of the name: my friend-colleague-mentor of many years, Anne Stadler.

At 87, Anne is still going strong, although she has to be selective with how she spends her time and mindful to take care of herself. (You can listen to Eric Liu’s interview of her here.) 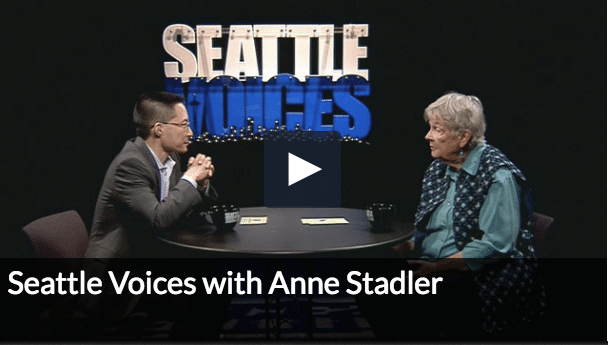 For over fifty years, as a mother, TV producer, community developer, educator, and peacemaker, Anne’s been a fierce advocate for the possibility of what Martin Luther King called The Beloved Community. She has stood up for social justice, for giving voice to those whose voices have not been heard, for encouraging participation, and fostering collaboration.

She teaches and models how to trust the wisdom that can emerge when we listen for the spirit within ourselves, within our groups, and within our communities.

Whether she’s supporting the peoples and waters of the Salish Sea or helping to bring Story Bridge to the world, Anne brings deep intuition, soul, and commitment to everything she does. Her commitment to always doing her own inner work strengthens her actions.

I couldn’t begin to count the number of people she has mentored and still does.

When I was a fledgling faculty member in a university, struggling to realize my dream of creating a new graduate program in leadership and management, Anne gave me the hand I needed to summit a steep and rocky slope. She blessed me with her network of connections and helped me assemble a remarkable crew of advisors to guide what we were creating. She supported me to trust myself and to trust the emergent wisdom within my group of advisors as we sat together and contemplated what this new program really needed to be. She helped mid-wife its birth.

I call Anne a true elder not just in recognition of her community contributions, her mentoring, or her wisdom. It’s because, throughout her life, she’s had the courage to ask one question and then follow the call:

“What am I being called to do?”

That’s the question we all need to ask.

I bet Anne will be asking that question for the rest of her life, even if the answer is: “Be still and do nothing.”

Being willing to ask that question, and then listen deeply, lies at the root of elderhood.

By asking, listening, and waiting, we find our individual answers. The Anne Stadlers of the world are to be treasured, not copied. They show us what vibrancy and commitment can look like at any age, and serve as the role models we need for elderhood as we age.

In honor of Anne, and on my birthday, I ask myself the big question once again:

“What am I being called to do?”