A Secret Tool to Help You with Difficult Conversations 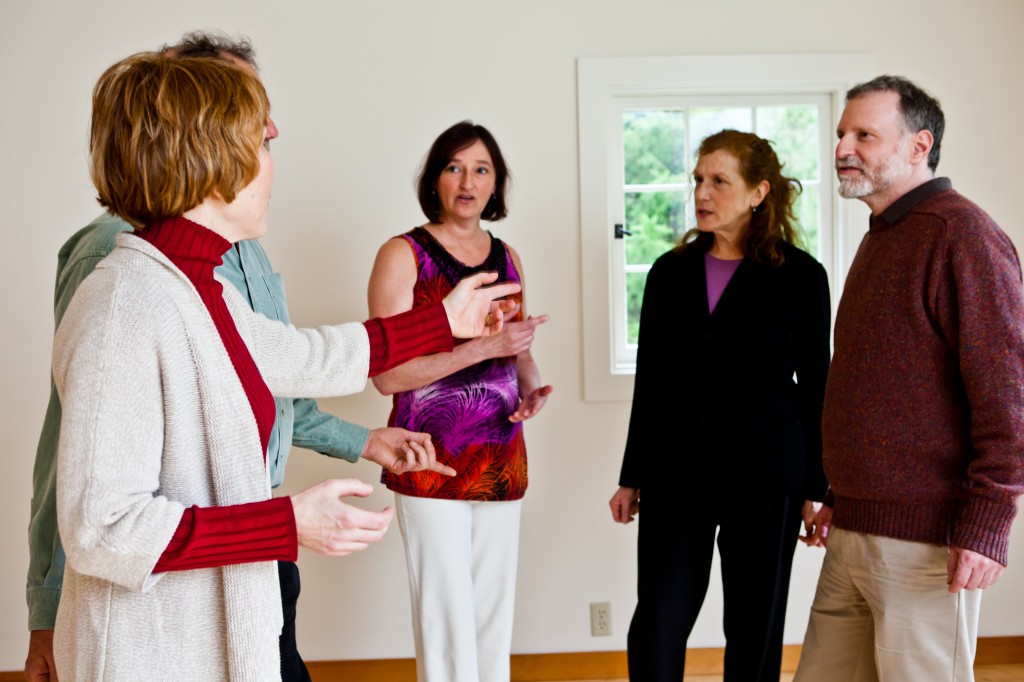 If you’re like most folks I’ve worked with, handling conflict, especially when it involves messy emotional conversations, is not your cup of tea.

Sure, conflict comes with the role of a leader – and it’s important to be able to have those difficult conversations around unmet expectations, performance standards, interpretations of commitments and tasks, etc. I bet you handle conversations well when differences are clear-cut, objective and technical. But do you (like many of my clients) run for cover when things become confrontational and feelings start flying?

Or do you just put off having them off all together?

In twenty-five years of coaching, I can’t remember one leader/manager I worked with who said, “I like working with conflicts.”

The trouble with difficult conversations is that, unlike fine wine, they don’t generally improve with age.

Putting off tough conversations doesn’t make them easier to have. But I have a new tool that can ease some of the stress: Improvisational theatre.

Improvisational theatre can make it easier to deal with conflict.

Mention improv, and many of us picture those incredibly witty, spontaneous and deftly clever performers we’ve seen on the stage or on TV. I love ‘em (still crazy about Robin Williams) but I can’t relate to those fast-paced motor-mouths – I mean, I could never even think that fast! But improv doesn’t require being uber-clever or talking a mile a minute.

The real key to improv is listening

(note to introverts: you’ll do fine)– and listening is the foundation for managing difficult conversations as well.

Here are seven things improv can teach us about conflict:

1) Commit fully to the conversation.

A conflicted conversation becomes dangerous if one of the parties involved decides to “check-out” in the middle of it. That can leave you in high water without a paddle – with a lot of emotional and other fall out. But, when you know that you and your partner are fully committed to a conversation, the odds are much greater that you’ll make it through in good shape. When an improviser goes into a scene, she commits fully to that scene. Maybe she doesn’t know what the heck she’s going to do. No matter. She’s going to listen, follow the thread, and play the scene until it’s over. If her commitment waffles, the scene is dead. But because she’s committed, she hears things and takes cues and suggestions (“offers” in improv lingo) she otherwise might have missed.

This is a cardinal rule of improv. No matter what your partner gives you, your job is to make him look great. This is nifty because focusing on your partner is a lot easier than having to look great yourself. It gives you something to do: listen for what you can do to validate someone else. That would be a great way to hold a tense and difficult conversation as well. Of course, you might not like your partner-in-conflict. I suppose this happens in improv as well (nobody says you have to be friends.) And maybe she gives you really dead-beat or weird offers to work with. Yikes.

It doesn’t matter.You’re going to keep listening and saying “yes.”

And, in a conflict, you are going to make sure that your “opponent” feels really heard. (OK, I will cut managers a little slack and say that if your partner is really acting like a jerk, you can compromise and just make them feel respected.)

The skilled improviser builds on whatever his partner gives him. Even weird offers and details that seem off base can become wonderful fodder for a twist in the story or an interesting elaboration. The improviser is constantly building a scene on what just came before. And it’s never over until it’s over. The leader also thinks “yes, and” and “both, and.”

Rather it means acknowledging what has been said (and the validation, however faint it might seem), using this as a stepping stone to build the conversation. Besides, your opponent may be expressing values that are important to your work together.

4) Have an objective, then adapt.

When an improv perfomer steps into a scene, she discovers or creates an objective: “Who am I? Why am I here, and what is the objective I am trying to achieve?” She can keep tuning into that objective, even as she follows, flexes and adapts to the twists and turns of the story. Leaders are unlikely to enter into a critical, conflicted conversation without advanced planning – including some background work – so that’s different from the improviser. However, improv can teach us how to hold on to an objective throughout a conversation while, at the same time, following it wherever it goes. This may sound like a contradiction, but it’s not!

5) Listen to more than the words.

A lot of an improvisational scene is carried in the non-verbals: the movements, the physical expressions and the emotional responses. This is true in a conflict conversation as well. People don’t usually fight about words, and rarely about the facts. They fight about what the facts mean, and because emotions get triggered. So keep listening for the meanings behind what you hear, and using all your senses to track on how your partner is reacting; pay lots of attention to emotional cues and non-verbal responses. When strong emotions come up, don’t run for cover. They’re just part of the scene. A leader listens for what is behind an emotional outburst while trying not to be triggered by it. And even those big, nasty emotional outbursts (I don’t like them, either), are just a twist in the story. Keep listening and hopefully those emotions can change.

I hate it when people use words like “you never” or “you always.” Generalizations are deadly – and they can ignite defensive behavior. Specific examples and behavioral data, however, are much more useful in helping people see the impact of what they’ve done. Improvisers work to develop specific details in a scene: Who they are, who they’re with, where they are, what physical objects are around, what relationships are present, etc. And improvisers use language everyone understands. They’ll never use consultant-speak unless, of course, they’re doing a very funny satire on consultants!

7) Be willing to be vulnerable…and laugh.

Improvisers learn to be vulnerable…on stage. After all, they’re performing before others and a good part of the time their scenes will not be working as well as they’d like. In my first improv class, Matt Smith taught us to take a “Failure Bow” (watch his hilarious TEDx talk about the bow).

Failure can hurt, so we say, “ouch,” and the show goes on. Some leaders feel that showing any vulnerability means giving away the kind of power they need to “win” a conversation. But what if showing a little vulnerability was just the ticket to becoming more accessible, more human and more real to your partner in the conversation? That’s the groundwork you may need to hold a win-win conversation. You can dominate with status and power. But do you want to win the conversation or create a foundation for an improved relationship going into the future? In case of doubt, and throughout, laugh. Laughter defuses tension. Laughter brings us together. And improvisers laugh a lot – if only at themselves!

Now aren’t you ready to jump in and try some improv? Check out my upcoming free workshop, Navigating Conflict with Improv, August 19th with Julian Schrenzel of Improv-Alive!  Check out the event on our events page: https://engagingpresence.com/event/navigating-critical-conversations-with-improv